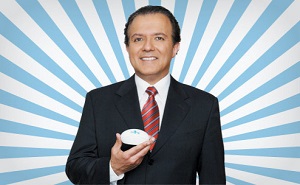 AJ Khubani’s journey from aspiring entrepreneur to the man ABC’s news division called “the infomercial king” is the realization of most business owners’ dreams. As founder and CEO of the original As Seen on TV company, Telebrands Corp., A.J.’s vision and leadership have created some of the country’s most well-known and popular direct response television products, including Amber Vision sunglasses, the Go Duster cleaning tool, and the blockbuster PedEgg foot care product.

People around the world have been captivated by A.J.’s story of hard work, persistence, and a driving belief in helping people save time and money through simple, effective products. The formula works and, as a result, he is a sought-after business and direct marketing expert, speaker, and media personality. A.J. and his products have been featured in a wide range of media, including major networks, national and international consumer and trade magazines, and some of the most respected newspapers in the world.